Switch to the dark mode that's kinder on your eyes at night time.

Switch to the light mode that's kinder on your eyes at day time.

Two German publications have now confirmed that simply by using a special driver, the Ethereum limiter appears to be nonfunctional.

NVIDIA announced that their new mid-range RTX 3060 graphics card will have a built-in anti cryptocurrency mining firmware that will automatically reduce the mining hash rate by 50%. NVIDIA confirmed that this technology does not only work on the software level, but also on the hardware level. Bryan Del Rizzo claimed that there is a secure handshake between the driver and the BIOS that ‘prevents removal of the hash rate limiter’. This today has been confirmed as untrue.

Following PC Watch reports, HardwareLuxx and ComputerBase now both confirm that by using the GeForce 470.05 driver, the Ethereum hash rate limiter is not working. It was earlier claimed that by using a special BIOS and driver the limiter can easily be removed. As it turns out, the hash rate can already be removed simply by replacing the driver alone, without the necessity to flash a new firmware. The driver is available through a BETA program and it is not available publically.

It has been later reported that the driver removes the limiter only for the primary card in multi-GPU systems. What this means is that if multiple RTX 3060 are installed in the system, the driver will uncap the hash rate only for one card.

The website confirmed that by using the GeForce 470.05 driver which is distributed by NVIDIA to developers under Windows Insider Program, the Ethereum limiter is not working. The hash rate does not drop over time, which was basically how this technology was intended to work:

ComputerBase can confirm that only the beta driver GeForce 470.05 distributed by Nvidia to developers and via the Windows Insider Program ensures that the performance of the GeForce RTX 3060 in the Ethereum algorithm no longer drops. A BIOS update is not necessary. 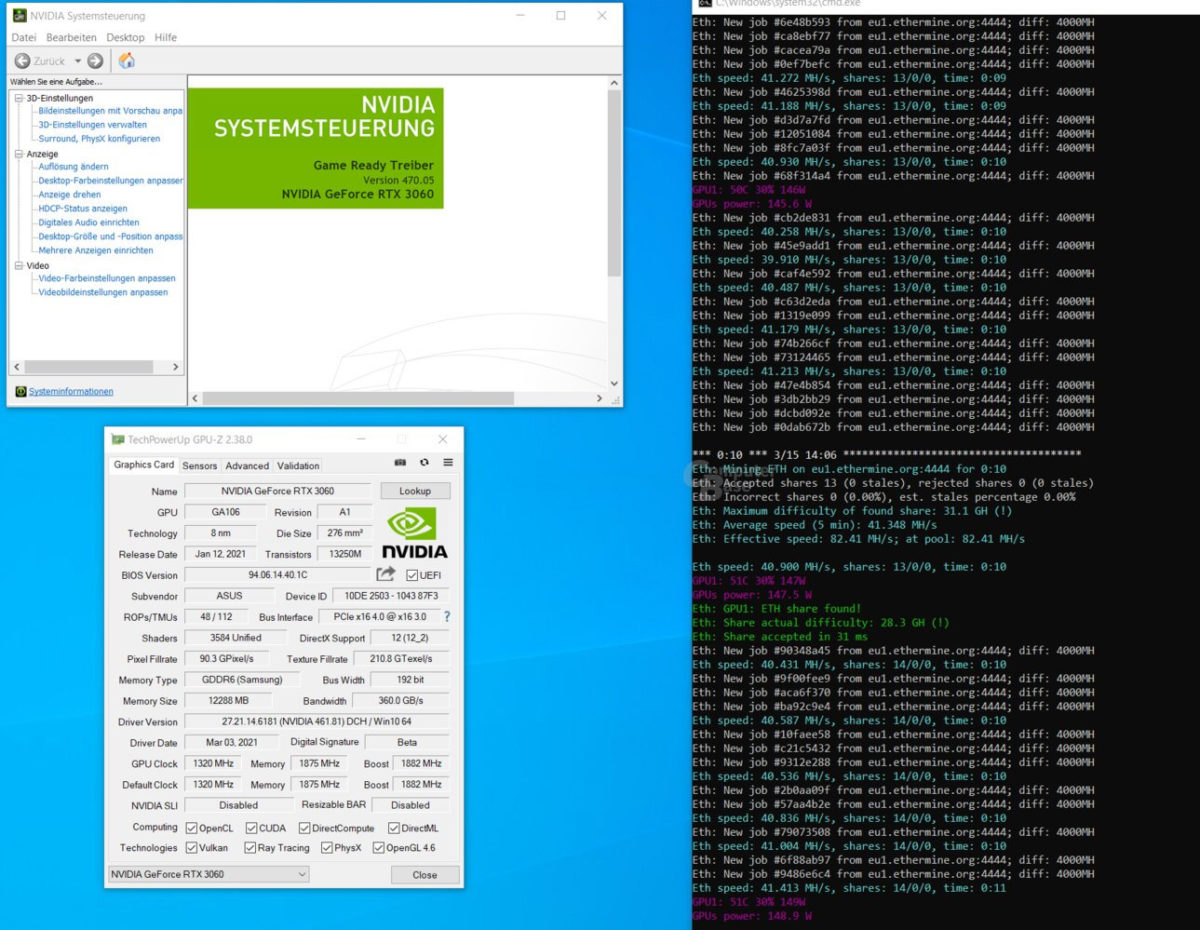 The driver method was also verified by Andreas Schilling from HardwareLuxx. The BIOS upgrade does not appear to be necessary, in fact, the EVGA RTX 3060 graphics card performs better in mining without that the ‘special’ BIOS. The 470.05 driver alone appears to do the trick:

As noted above, the driver only works for one GPU, which might actually be good news for casual miners but not necessarily for big mining farms. It is unclear if there are any other tricks that would allow multi-GPU systems to offer the full mining potential on the RTX 3060. What is clear is that the anti-mining technology did not even last a month. It probably would have taken more time if not for NVIDIA’s (un)intentional driver release.

© 2022 by bring the pixel. Remember to change this